What Type of Algorithm is used in EmaratCoin — AEC ?

Up until block 10,000 it was a hybrid coin in that Proof-of Work (PoW) was also an option. The reward for PoW was set at 0 in EmaratCoin. It was only added to assist in securing the network if it was ever needed.

Proof-of-Work happens through miners trying to solve exceptionally difficult math problems. Finding a solution is basically a guessing game, but checking if a solution is correct is easy. Miners aren’t able to cheat the system because it takes real-world resources to work out these solutions. As more and more miners try and solve the math problems, the difficulty of the math problems automatically increases. After a short while it starts to take a huge amount of computers and electricity to simply mine the coin and keep the network going. This leads miners to have high energy costs and this is clearly awful for the environment.

PoS happens by a miner putting up a stake, or locking up an amount of their coins, to verify a block of transactions. The cryptographic calculations in PoS are much simpler for computers to solve: you only need to prove you own a certain percentage of all coins available in a given currency. For example, if you somehow owned 5% of all EmaratCoin- AEC, you’d be able to mine 5% of all transactions across EmaratCoin — AEC. 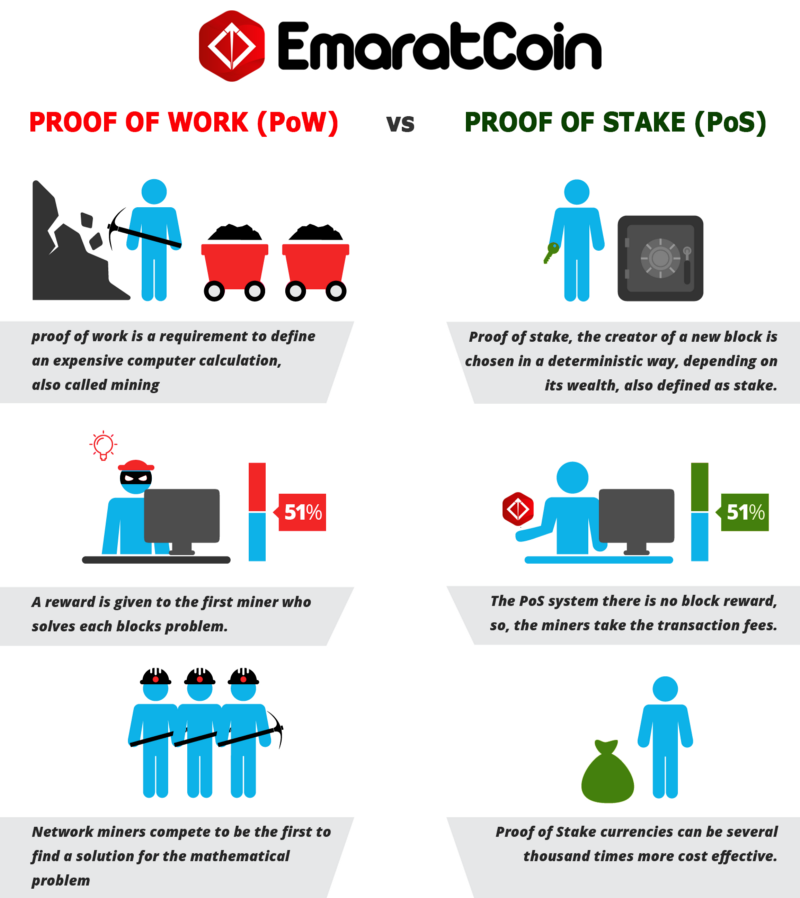 How Do you Stake Coins PoS in EmaratCoin— AEC ?

What is meant by ther Terms Weight in PoS ?

Does my Wallet have to be open 24/7 to Receive my Stakes ?

It is true that to mine any coins your wallet must be open. If your wallet is closed it cannot be part of the staking. However the PoS rewards do NOT take into account the length of time a wallet is open. If you open your wallet for a few hours once a month you will receive roughly the same amount of coins as someone who is staking 24/7. The 24/7 Wallet will receive many more smaller amounts and the wallet open infrequently will receive less but larger amounts. The total will roughly be the same. The issue with doing this is that when a wallet is not open for a long period of time, then is opened again, the amount of potential Staking weight created by that wallet will be very high while the rewards catch up to meet the 365 day inflation calculation. The ideal situation is to leave the wallet open 24/7 so it provides a steady amount of PoS mining power on the network and acts as a node for gaining consensus.

Are my newly staked coins automatically put back into the pot again for Staking ?

Any new coins and the coins used to mint them are NOT eligible for Staking again until the coins have received 50 confirmations & have minimum 8 hours in spendable state.

How Do I mine EmaratCoin — AEC using PoW ?

After block 10,000 EmaratCoin PoW was switched off. Originally EmaratCoin PoW reward was set at Zero. The option to use PoW in AEC was simply there incase the network stalled using PoS. For instance if there came a time there are no coins available for Staking than anybody could of mined the coin via PoW to move the network along until such a time that coins become available again for PoS. PoW was simply a backup.